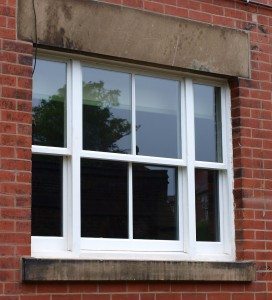 A concrete lintel above a sash window

A sash window lintel is the structural horizontal support used to span the window opening in your wall or between two vertical supports. It is frequently used over both sash windows and doors, both of which represent vulnerable points in a building’s structure. Lintels are generally used for load-bearing purposes, but they can also be decorative in nature.

Lintels are important in terms of reducing the heat loss from a building, as well as condensation. Lintels must be designed and constructed carefully to avoid a direct connection between the inside and outside. This may include the creation of a cavity within the wall above the lintel, and the insertion of insulation.

Many people will be familiar with lintels without even knowing they are; ancient monuments often have some lintels remaining spanning the columns – think of Rome or the Acropolis in Greece. These ancient lintels were mainly decorative rather than structural.

The West originally saw lintels emerge during the 18th Century Classical period, when they were used for decorative and structural reasons as part of the post and lintel construction technique. A lot like you see in period windows from a variety of sash window styles.

You will most likely find lintels throughout your property, above the sash windows that we are concerned with, but also above the doors and even to support a chimney above your fireplaces if you have them.

The most common materials used for lintels are:

Wood – which is low cost and easy to cut to the correct size but generally only suited to small openings where the loads are fairly small.

Concrete – this can be cast to the length needed and comes pre-cast in many standard lengths. It is relatively low cost and is strong enough for most window and door applications. It can also be finished off in a variety of means making it a popular choice.

Steel – made from galvanised steel beams cut to length and shaped as needed, steel is lighter than concrete equivalents and so easier to manage on site but it is the more expensive option. For large projects where custom shapes are needed however it is an excellent choice. It is also very strong so can take a high load.

We will ensure all sash windows that we restore or replace and correctly fitted in relation to your lintels which normally do not require replacing unless they are badly damaged or rotted for wooden lintels.