Across the country our historic towns and villages record a detailed history of architectural development. One of the easiest ways to tell which era a specific building is from is by looking at the building’s windows.

The earliest windows were essentially very small apertures in a wall; imagine the windows you see in a medieval castle, which are more just small slits in the brickwork covered with a small piece of glass, providing a limited view. This Gothic technique was the norm until the 16th Century, when leaded lights set in metal ‘casements’ or frames began to be less exclusively the preserve of the very wealthy. This development allowed, for the first time, larger glass panes to exist as the casements reinforced them.

From the early 1600’s sash windows replaced this method. A sash window is made up of movable panels, called ‘sashes’, that feature individual panes of glass and move independently from fixed panels. The windows open by sliding the sashes in front of the secured panes, so that the two panels sit one on top of the other. The key innovation here was providing residents with the option of opening the window and letting fresh air in, something the previous casement method could not do.

Early sash windows were divided by glazing bars creating nine, 12 or 16 separate glass squares, which were then set into a wooden box creating one complete sash. However, after the great fire of London in 1666 the previously laissez faire government intervened to try to prevent the fire happening again. Amongst other fire prevention measures, they introduced regulations in 1709 that called for the timber frame of the sash to be recessed behind the outside stone or brick.

This regulatory change led to a new architectural paradigm in the Georgian period. Along with the new regulations, windows became more refined as better ways of producing strong glass were developed, allowing for thinner panes to be made that also required less separation. This meant that during the 18th century the average number of separate squares fell from nine to six and by the end of the century this had again fallen to four.

During the regency period in the early 19th century the design changed once again. The popular design changed from separate but equally sized squares to ‘margin lights’. Margin lights had smaller panes around the edges of the sash with the one larger central pane occupying most of the space.

The margin light method of making a sash window became the common practice up until plastics were invented in the middle of the 20th century, when other materials began to be used, as well as the traditional sash method.

If you do want to know a bit about the age of the building, you can easily make a rough guess by looking at its windows. The less separate squares the window has, then usually, the newer the building. Furthermore, if the separation of glass is done in the ‘margin light’ method then the building will be even younger. 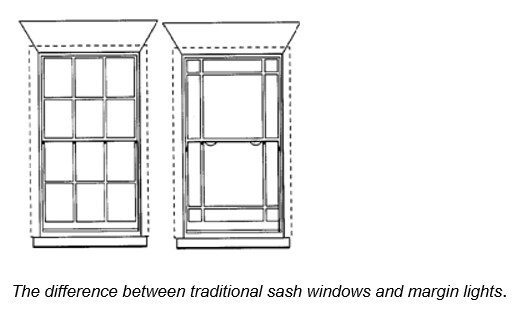 If you would like to preserve the traditional appearance of your windows, in keeping with our national heritage, and would like a quote for the restoration, repair or replacement of your sash windows, a specialist company like yoursashwindows.com will return your windows to their former glory with expert and sympathetic restoration.